Experts have given forecasts of BTC movement until the end of the year.

Most of the top 10 cryptocurrencies in the CoinMarketCap capitalization rankings started Wednesday with a positive movement. After the recovery of positions on Tuesday, bitcoin corrected to $ 11 792. At the time of writing (10:52 Moscow time), the daily fall in the asset rate is 0.79%. The best result of a positive movement was registered with Binance Coin (+ 8.05% in 24 hours). 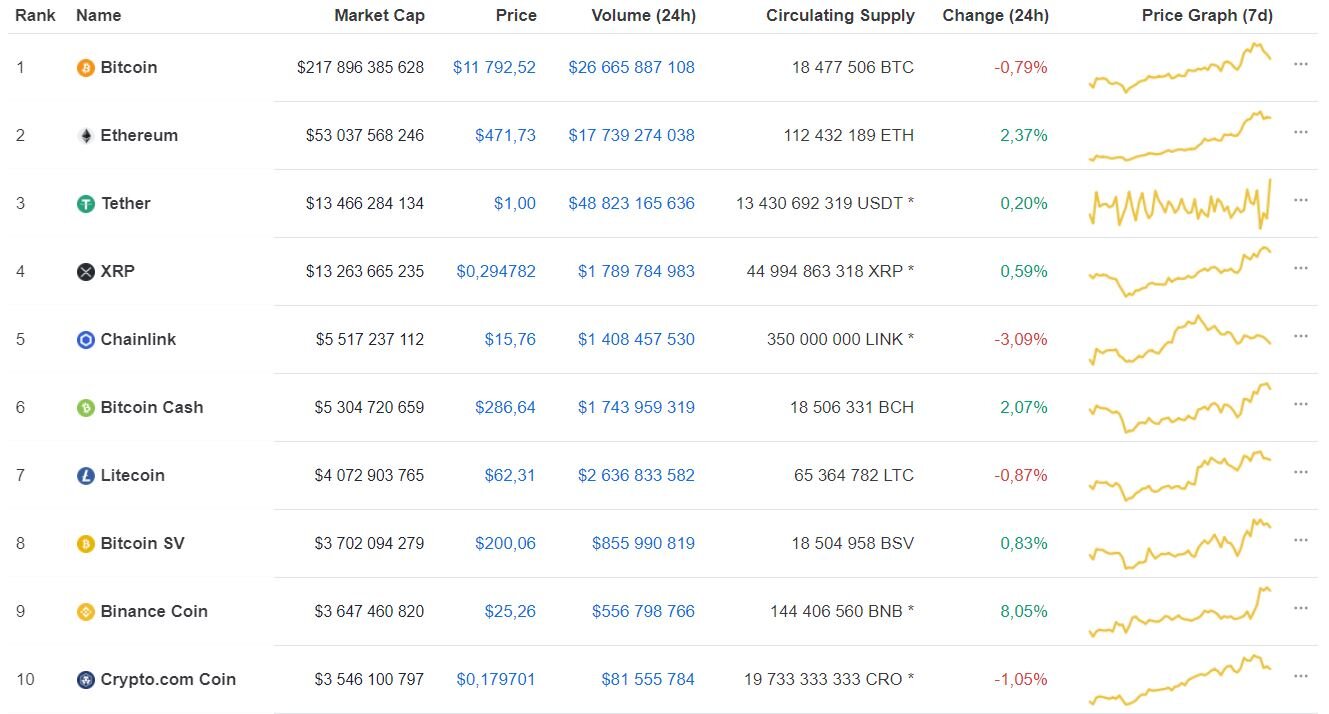 Experts shared their opinion on whether bitcoin will be able to repeat the rise to $ 12 thousand in the near future, how much the cryptocurrency will cost by the end of the year, and how the position of the digital asset market will change with the arrival of autumn, experts shared with BloomChain.

Nikolay Klenov, financial analyst at the investment company Raison Asset Management, drew attention to the fact that in recent months market participants have seen an increase in demand for the first cryptocurrency (bitcoin). In his opinion, by the end of the year it may well break through the resistance level of $ 12,000.

“If this happens, the road to $ 15 thousand and more will be opened,” the expert said.

Nikolay Klenov noted that at the moment the news background for bitcoin is positive. The central banks of developed countries, including the Fed and the ECB, are inflating the money supply: in his opinion, this is a plus for BTC as an asset with limited emission. The expert also drew attention to the fact that the halving that took place this year, he believes, has not yet been won back by the price of the cryptocurrency.

Another positive factor for BTC, he called changes in the laws of different countries in favor of greater loyalty to cryptocurrencies. In particular, the specialist drew attention to China – the country’s regulators intend to launch the digital yuan. Also in the market, as Nikolai Klenov noted, there is talk about a digital dollar, etc. This, in his opinion, increases investor confidence in cryptocurrencies in general.

Despite this, he believes that long-term predictions for bitcoin should be made with caution, as its future depends on various factors. On the one hand, on the long horizon, the expert is sure, one can expect a significant rise in the price of BTC due to its limited emission and positive changes in the laws of different countries.

Based on this, according to Nikolai Klenov, we can conclude that the most effective investment strategy in bitcoin is long-term retention. However, this approach, in his opinion, also has risks, in particular – the risk of the emergence of more advanced crypto-technologies.

“Technically, bitcoin is already outdated: its mining is expensive, security is not at the highest level. New currencies are constantly emerging. BTC is still leading in terms of capitalization, however, since 2014, the trend has been downward: the share of bitcoin in the market as a percentage of other cryptocurrencies is gradually decreasing. So I would not recommend investing more than 10% of the investment portfolio in the coin, ”the expert summed up.

A graph that reflects the share of bitcoin in the digital asset market in relation to other popular cryptocurrencies. Data: CoinMarketCap

Financial analyst Aleksey Ivanov, in turn, “is absolutely sure that we will see $ 12,000 in the near future, that is, at the beginning of September.” Further, the situation, in his opinion, will depend on the mood of investors, and he is now “extremely optimistic.”

His confidence in the growth of the main digital currency – bitcoin, in particular, and the entire crypto market in general, is based on several factors:

Instability of the global economy and lack of reliable financial instruments. This situation, according to the expert, led to a significant increase in the price of gold on the world market.

The emergence of new technologies such as DeFi.

Expansion of cooperation of crypto exchanges with banks, which simplifies the procedure for exchanging fiat money for crypto and vice versa.

All these factors, according to Aleksey Ivanov, give hope that bitcoin will return to historic highs by the end of this year. 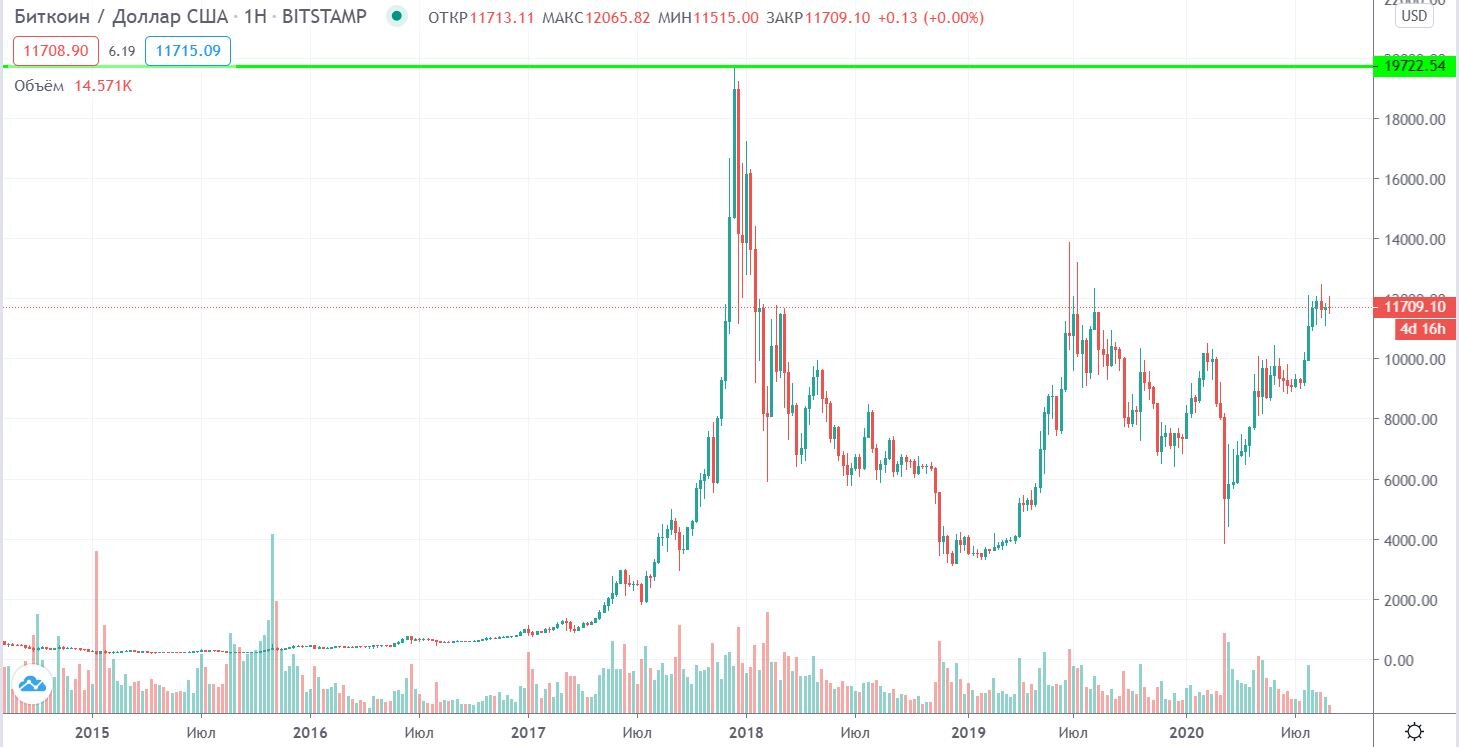 The maximum value of bitcoin was reached at the end of 2017, near the $ 20K level. Chart: TradingView

The official representative of the Garantex exchange, Tatyana Maksimenko, agreed with Alexey Ivanov’s opinion on the prospects for the positive movement of bitcoin in the near future. She believes that bitcoin has “all the trump cards in hand” to overcome the $ 12,000 in a month towards the end of September.

“At least this fall, by the end of November, in my opinion, we will see how the cryptocurrency overcomes both $ 12 thousand and $ 13 thousand, and by the end of the year it is quite possible that BTC will reach $ 15 thousand,” Tatiana Maksimenko said, adding that summer for cryptocurrency is not a time of growth. 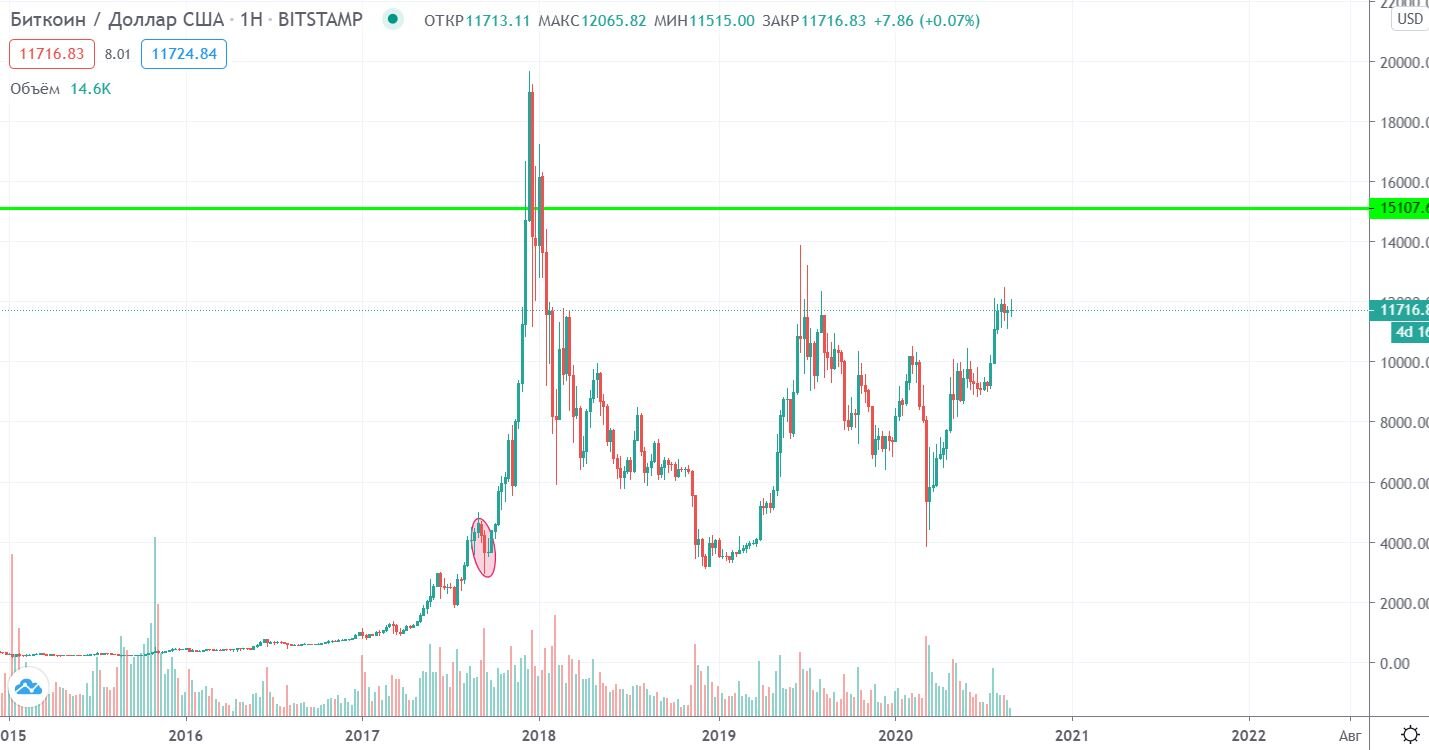 The level to which, according to Tatyana Maksimenko, bitcoin will be able to reach by the end of the year. Chart: TradingView

In her opinion, more often the cryptocurrency grows towards the end of the year, closer to Christmas and New Year, and then closer to the New Year according to the Eastern calendar. At least, according to the expert, this was the trend of previous years.

At the same time, Tatyana Maksimenko is confident that bitcoin will not updаte the absolute maximum in 2020. BTC, she said, is greatly influenced by investor sentiment in the market.

“This is an asset of sentiment, and now I do not see the enthusiasm among investors that was in the fall of 2016, for example, when bitcoin rose in price quite rapidly in the fall and in winter it already cost $ 1,000,” the expert explained her point of view.

Bitcoin, in her opinion, will be able to updаte the historical maximum in the fall of 2021. By that time, she believes, the effect of the third halving should be fully revealed.

“Already now we see that miners are in no hurry to sell mined coins at current prices and are clearly waiting for a rise in price, because part of their income with halving has disappeared, and in order to stay at the same level of profitability, they need higher prices,” Tatiana Maksimenko summed up.